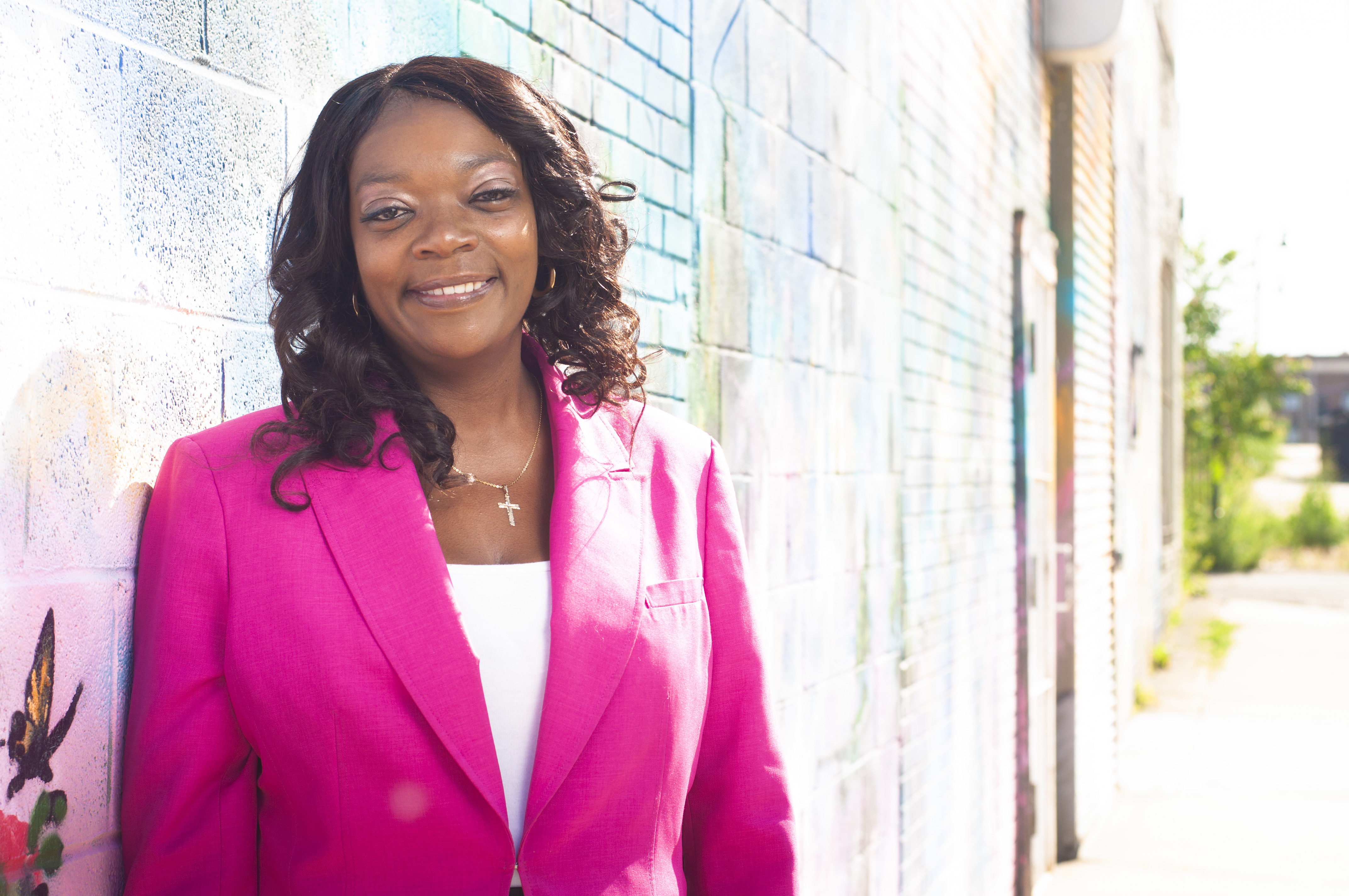 A Conversation with Sharea and Janee Ayers

Today we sat down with sisters Sharea and Janee Ayers who are giants in the Detroit community. Sharea is the chairperson and founder of the Juneteenth Jubilee Detroit Committee, and Janee is the At-Large Detroit City Councilperson. In this interview, we’ve talked about the upcoming Juneteenth Jubilee Stroll, what their experiences are being community advocates, and some of their favorite black historical figures.

Q: Can you introduce yourselves and talk a little bit about your roles within the Detroit Community?

Sharea: My name is Sharea Ayers, and I am the chairperson and founder of the Juneteenth Jubilee Detroit committee. I also work in the office of Family and Community Engagement for Detroit Public Schools Community District. So, I do a lot of work in the community for our parents or stakeholders as well as the black community with raising awareness about Juneteenth and coordinating events around celebrating the holiday.

Janee: She’s being modest… She left out the fact that she was in the classroom for over 10 years.

Sharea: Yes, I was in the classroom and I also did Black Out Trivia which also celebrated black culture and trivia, so that was a good time too. Thank you, Janee.

Janee: And she started Black Girls Rock when she was at Detroit International Academy for Young Women.

Sharea: Thank you, Janee. That’s why I love my sister. And if you leave anything out, I’ll jump in.

Janee: My name is Janee Ayers, and I have the pleasure of being her older sister. As of now, for the last 6 years, I’ve served as the At-Large Detroit City Councilperson. Before this, I’ve been a Union negotiator so my business, my life has been dedicated to serving others, making sure that working people are taken care of. I’ve started the Returning Citizens Task Force while in my role as Councilwoman. What that aimed to do was to address the concerns of incarcerated individuals returning back home to the city of Detroit. I worked in Recreation.

Q: What was your vision in creating the Juneteenth Jubilee? What were your overall goals?

Sharea: The goal for this year was to increase economic nationalism in the Black community and to help our people understand that we definitely make a difference in regards to our spending habits and our power economically. So that was the goal behind activating Livernois and bringing the idea to the committee and watching it flourish with their input as well.

Q: As Educators, why is it so important to teach our youth about Juneteenth?

Janee: We teach kids in school about everybody else’s background, and everybody else’s impact--whether it is good or bad in their lives. What we don’t do is teach them that it’s not always about the slavery stories. We have power, strength, wealth and we had generational wealth and we need to let them know that that is the fiber of their being and it changes their whole mentality and it changes the way that they see themselves. If they see themselves differently, they’re going to look at all three of us differently. It’s a way to create more self-worth. I think that’s something our kids are missing, and it’s also because their parents are missing it. None of us have gotten it the way we should have over the years.

Sharea: I agree. And the biggest thing, just from teaching, if we have something in place for everybody to celebrate, it could help in creating a cultural shift. People will buy into celebrations and they will buy into fun and if we can give them the message in a more palatable way, then that will also help them in regards to how they take pride in what they’re doing and who we are as a people because they have something associated with it.

Janee: I just want to put on the record that my sister and her efforts helped me to be able to be in this space and declare June 19th via resolution as Juneteenth Day for the City of Detroit. We did that about three or four years ago.

Q: What are some of your experiences being a community advocate?

Sharea: Just from talking to my sister on a regular basis, it’s different on our different fronts. On the political front, she deals with much more. But on the other hand, it’s a lot. For me, I have been blessed to work with people who are like-minded who honestly want to uplift the community in regards to celebrating our history in this country. So that’s been a really awesome thing to work with people who do what they say they’re going to do and follow-up. That really takes some of the stress off. Getting other people outside of the committee to be part of the buy-in and making sure they understand what we’re doing. It’s interesting to me because prior to the benevolence of our sponsors, we were charging for the tickets because we wanted to make sure people had a really good experience. A lot of people were asking, “Well, what are we paying for?” But I found it interesting that there are strolls in Royal Oak and Ferndale that happened prior to COVID and some of the same people I would see there would never question anything. I would say the buy-in was more of the challenge because if it were free and we were giving away things then everybody is cool with it. But if you talk about anything around money in our community, then there’s more apprehension as opposed to spending money in other aspects.

Janee: What I would say, as it pertains to community activism and advocacy, being in this role changes the way I would be able to approach things. We’ve been able to get Juneteenth recognized in the city of Detroit. Right now, we’re having this discussion around reparations and that looks like. Even though my heart of hearts says, “Hey! Let’s cut a check right now, let’s make everybody whole,” that’s not real. I have to operate within the confines of what this government system looks like. It can become tricky because I have to balance what my emotion wants to do, but then I have a responsibility to make sure that the 85% Black city that we live in is fiscally responsible, that we’re solvent, and that we can live to see another day where I’m not putting Black people in a disadvantaged space simply because I want to jump on to what the popular hashtag is. I have to look at things from a two-fold perspective. Sometimes that part becomes a little irritating, because you want to tell people that are saying “You’re not doing this enough!” And I’m like, “I need you to understand where I am.” I have to look at it from two different perspectives. My love for this community extends far beyond this one hashtag or this one trending topic. I want you to have a home in the city. I want you to feel represented. I want you to have a space. But I have to do it responsibly, so that we could even have that conversation going forward.

Q: What is the most rewarding thing about being a community advocate, educator, and politician?

Janee: From the education perspective, that’s probably the one thing I would go back to do for free. I love seeing when the lightbulb turns on and the students get it. It’s not about what you’re teaching, but when I just see that you get it. You get the things that I’m trying to say. That you are worthy. That your situations don’t define you. Okay, cool, you understand osmosis, but you see in totality that you hear me. That part is beautiful and that’s what I love about educating. We were lucky because our mother was an educator, our family is full of educators, our brothers are educators. That’s just where we come from.

For the political side: this is a very, very thankless job, just like teaching can be. But what I love the most about it is knowing that I get to see the change right now. And then, later on, it’s like I went to war about this issue, but I’m looking for projectives. I’m thinking two years out, and when that two years passes, then I’ll see things like the way the Avenue of Fashion looks right now. Then, I get to see my baby sister go ahead and activate the space that I worked so hard to make sure existed.

Sharea: I think the most gratifying experience of it all is just seeing everybody enjoying themselves. It is a lot of talking, and meetings, and working behind the scenes. Just seeing people being able to enjoy what we worked so hard to put together for months. And also, to just educate people. The idea of networking and the fact that people like my sister, or Councilman McCallister, or Mayor Duggan, or all of the various businesses on Livernois, etc. All of these different entities that are coming together are good for networking and are good for building relationships. It’s good for continuing to activate our Blackness 365 days a year. That’s the beauty of everything. Being able to be a vessel to connect people and seeing people enjoy themselves and the work that we’ve done.

Q: One last question, and it’s a fun one: Who is one of your favorite Black historical figures and why?

Sharea: One of my favorites is Fannie Lou Hamer. She is definitely in my top five. I like Fannie Lou, because she was very vocal on the political scene and she was one of the co-founders of the Mississippi Democratic Freedom Party. One of the things she did--that a lot of people weren’t doing at the time--was talk about the issue of intersectionality and women’s health issues. She was very strong in advocating against the Mississippi appendectomy, where Black women had hysterectomies performed on them without their knowledge. She talked about intersectionality with sexism, racism, police brutality, etc. Fannie Lou was about that life! I loved that she was a woman, curves and all, who spoke her mind and backed it up!

Janee: I’m going to answer this question in a more obscure way. My heroes are all of the black women whose names aren’t remembered. I had a conversation with one of my friends this morning, and he talked about his great-grandmother Birdie. She owned property in Tulsa, Oklahoma and was a part of the melee that ensued. His grandmother went looking for her mother, because she hadn’t heard from her. She went to her house and Birdie had been tied and bound her to a chair by a white man who came and robbed her of all of her things. But the one thing that they couldn’t take from her was her land. It’s those types of stories that resonate in all of us. It’s the thing that keeps us going when we feel like we’re tapped out, and you don’t know what it is that keeps you moving. It’s the tears and the sweat of those ladies that are a part of our history that keeps us going.